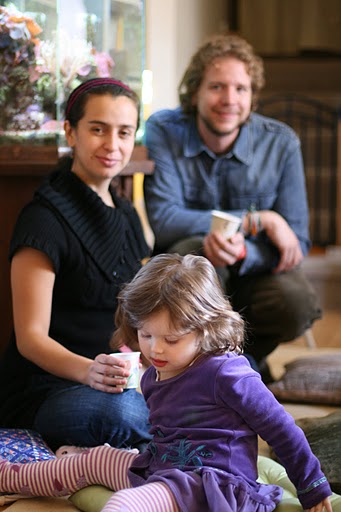 Dear Faith, I am a working mom (though I would much rather be a stay at home mom, it’s not financially possible at this time), and my Mother-in-Law cares for my 2yo son each day. Lately, when she’s been leaving, he’s been falling apart completely. Do you have any suggestions for how to make “parting with grandma” easier? Yesterday he had a total meltdown. From the kitchen, I heard her tell him “I will be right back”…which made me cringe, because I do NOT like lying to children about things like that. Looking back, I wish I had tried “validating” more, by saying “you’re sad that grandma is leaving, i’m sad too”.. etc… but he was instant-hysterical and it’s so hard to calmly talk with him when he’s like that. Not to mention, it just doesn’t *feel* like he understands or is even listening when I am trying to use ‘validating’ words to him. I would love any words of encouragement you could offer.

Thanks for writing. First off, how lovely that he has such a strong relationship with his grandma. Children have lots of love to give, and it’s great that he is with someone he loves deeply while you’re working. I have lots of experience helping children say goodbye, so here are some ideas that may help:
Saying Goodbye
-When it’s time to say goodbye, have the person who will be staying with him, pick him up for the goodbye process. Then the person who is leaving can lean in for a kiss, and everyone can wave and blow kisses. This way, there doesn’t have to be a hand-off where he’s clinging to the person who has to leave, and needs to be pulled away.
-Another thing that can work well is to say goodbye through a window. You can do this in conjunction with the technique above, or do it by itself if goodbyes are really hard. Pick him up and say, “Grandma’s getting ready to go. Let’s go stand by the window and wave to her!” Go over to the window, and you can ‘listen’ to grandma as she gets her last things together. “I can hear her putting on her coat! Oh, there’s the door opening…Now I see her through the window! Goodbye grandma, goodbye!” Grandma waves and smiles through the window, and you and your son wave too.
These two techniques are really good because he is secure in your arms the whole time. You’re not tearing him away from her. In my experience, it’s the ACT of parting that is so hard, much harder than BEING apart. So make the act of parting be as smooth as possible, let him know that you love him and you’re glad he’s there with you, and help him move on.
Helping Him Move On
If he’s inconsolable, don’t try talking to him right away. Just hug him and be there with him. When he can listen again, validate his feelings by talking about what he loves (so, instead of, “You’re sad grandma is leaving,” try, “You love having grandma over so much! You love having her here”). Then help him move on, either by talking about what he did with grandma that was fun or by talking about other things that he loves: “What else do you love? I know…you love your stuffed dog! Where is that stuffed dog?” Look around for it and when you find it, YOU give it a big hug and a snuggle, then give it to him to snuggle, while he’s still in your arms. Then find something else he loves, moving more into action if he’s ready…he won’t be able to move into play right away, but as you talk to him about things you can see or things you might do, he’ll gradually be ready to move out into the world again.
In general, I’m not a fan of sneaking away or saying you’ll be right back. These things make it easier for the one who is leaving, but I believe they undermine trust and can lead to ongoing anxiety that their loved one may disappear at any moment. Instead, set yourself up for success and make the process go as smoothly as possible, then give him hugs and kisses and let him know you’re glad he’s there with you.
The attitude of the person saying goodbye can make a big difference too; I wrote a post on that here:
/2011/10/starting-daycare-and-saying-goodbye/
I hope this gives you some ideas, and hang in there, mama!
Warmly,
Faith Collins
Category: Childcare Groups, Discipline & ConnectingTag: grandma, independence, rituals, saying goodbye
Previous Post:

Make Your Own Rituals
Next Post:When You Can’t Pick Him Up