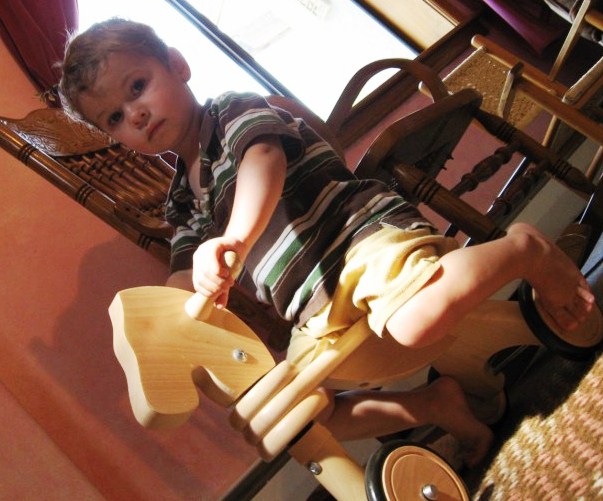 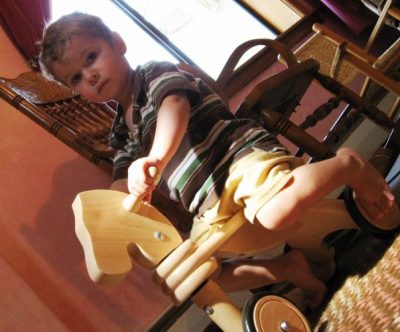 I was wondering what your philosophy is on when a child is “bad,” like when they hit or do something that directly disobeys what you have told them to do. I know you use the phrase “it looks like you need some help” and then help him to follow through, but what about when they hurt someone else? My son is only 19 months so I know it’s a bit different, but he has hit his little friend as well as me and the dog when he is frustrated. My sister encourages spanking (um, no) and my neighbor does time-outs. I don’t think time outs work with your philosophy so I was wondering if you’d speak to that. Thanks so much!

Dear Mama,
Thanks for writing! At 19 months, I don’t think that a child hitting is being ‘bad,’ even if you’ve just told him not to–it is simply that his impulse-control hasn’t developed yet. And that impulse to hit can be pretty strong! So, you have to teach him what’s acceptable behavior and what’s not. But realize that children at that age can only learn things from imitation, and from practicing many, many times. Children at this age don’t learn from being told what to do, and they don’t learn from being punished. So instead of punishing him, simply correct his behavior: help him touch in ways that ARE appropriate, every single time. If he has hurt somone, tend to the hurt child first, and then go back and help him practice again. Here’s what it looks like when I do it. Let’s say we have JJ who is hitting, and Sophie who get hit. I see it happen but I’m not close enough to prevent it.

Sophie: Waahhh!
Me: Oh, no! Sophie, are you OK? (I go over to Sophie, who is not badly hurt. I stroke her arm and back. She immediately starts to calm)
Me: JJ, you forgot! You must touch your friends only with your gentle hands, like this! (I’m still stroking). Here, you try. (I take JJ’s hand and help him stroke Sophie’s arm). Yeah…that’s nicer, isn’t it, Sophie? Are you feeling a little bit better? JJ is just learning to touch with his gentle hands EVERY TIME. He’ll get there soon.

In that scenario, it changes JJ from being a ‘bad’ kid, to being one who is just learning this new skill. I think this is both more useful and more accurate. It also mends the relationship between JJ and Sophie, where sending JJ away (time-out) or making him cry (spanking) would not do that. If Sophie is crying harder, I will comfort her first, to the point where she’s calmed down a little bit. Then we would have that conversation. If Sophie doesn’t want JJ to touch her, even with his gentle hands, that’s when I might move to help JJ find a toy that she might like, or blow her a kiss, or some other action that can help make things better. Then he might practice using his gentle hands on me, while I’m still holding Sophie or she’s nearby.
You can even use this scenario when your son has been rough with the dog–notice that Sophie is not required to talk. Your empathy to the dog helps him realize that his actions have caused harm, and you help him practice appropriate actions.
One way that I’m different from a lot of people is that I don’t tend to talk about the bad behavior at all. I don’t say, “Don’t hit,” or “We don’t hit,” or even, “Hitting hurts your friends.” I find that talking about hitting does nothing but bring images of hitting to mind, even if we put a ‘don’t’ in front of it, and empathy conveys the message that his actions have caused harm better than any explanation can. So I show empathy, I talk about what IS appropriate, and I help them do it. If the child is fully verbal, I might brainstorm after the fact with the child on what they might do differently in another similar situation: “If Sophie is trying to take your toy, you can say, ‘Please let go.'”
Does all of that make sense? Bring up questions? I’ve used it with many children at that age, and it works well when we can be really consistent. The hard part, of course, is keeping our own feelings of anger in check. That’s part of why punishing a child can feel good, because we get to do something with our anger. But acting on our own anger is not a great way to teach children self-control. Children are just learning the skills of controlling their impulses, and helping them is much more useful than punishing.
Here are a couple of posts that might help:
/2011/08/pre-verbal-hitting/
/2011/02/why-i-dont-use-sorry/ (this is more for older kids, but it explains why a little)
Category: Discipline & Connecting, Your Social ToddlerTag: kindness, teach through imitation, Your 1 Year Old
Previous Post:

Biting from Overwhelm
Next Post:Separation Anxiety