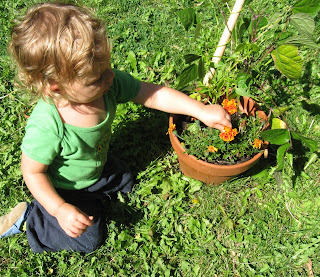 My son is 22 months and he always wants to pound on the computer keyboard or grab the mouse. My husband yells at him a lot for this, and the whole thing is driving me crazy, but I don’t know what to do. Any ideas you have would be welcome.

Hi there,
It’s not surprising that your little guy wants to bang on the keyboard and grab the mouse, that’s what he sees you and dad doing, all the time! Children want to be involved in whatever we’re involved in, and they want to do whatever they see us doing. That said, it’s not always appropriate for them to do what we’re doing! What to do?
I have a couple of suggestions: the first one is to get or make a toy computer that he can play with, so he can use that imitative urge. You can make a perfectly good laptop out of a FedEx box, some construction paper, and a marker. However, this will only solve part of the problem, because the real issue is that he sees your computer sucking your attention away, and he wants to be involved in whatever you’re involved in. But yelling at him not to touch doesn’t get you very far. Here’s the important piece:
Whenever a child wants to touch something that you don’t want them to be messing with, think of a way that he CAN touch/interact with it, that is OK with you. Using one finger is often helpful. For a laptop, it might be that he can run his index finger along the edge that protects the screen. Next, teach him how to do it. And from then on, whenever he wants to interact with the computer, you can guide him to touch it in this way that you’ve sanctioned. So you’re never pushing him away, you’re never yelling at him to stop, you’re just reminding him, again and again, how he CAN touch it. “Oh! You can touch it on the edge, with your finger.” (Show him. He imitates). “That’s right! You’re touching the computer! That’s the way you do it!” You smile into his eyes, and he’s thrilled that he gets to interact with you around this object which you spend lots of time concentrating on, and clearly love. You’re not pushing him away, you’re inviting him in, in a way that is age-appropriate. He can touch the edge of the computer as many times as he wants to.
I have done this with children that age with many things, and it seems to satisfy them. I had one little girl who was a little younger, 17 months or so, who desperately wanted to grab my knitting whenever I’d sit down with it on the couch. Instead of pulling it away from her or chastising her, I came up with a little ritual: whenever she wanted to interact with my knitting, she could put one finger up and touch the tip of one needle, then the tip of another. It took a couple of days of near-constant practice with her, but eventually it became an established ritual, and then lost much its interest (perhaps because it didn’t get such a big response as grabbing my knitting had?). After that she would come up and touch my knitting needles about once an hour, but no more. Each time was a little chance for us to make eye contact and connect briefly, and then she’d go back to her play. She rarely grabbed it again. I’ve also done this with flowers in my garden: with flowers, you can touch them with one finger, or you can smell them. That is all. Children are satisfied with this, just as they are satisfied with the fact that the garbage has to stay in the trash can, or the lamp has to stay upright, or all of the other rules around touching things that we have in our lives.
Warmly,
Faith Collins
Category: Childcare Groups, Discipline & Connecting, Your Social ToddlerTag: grabbing, re-direction
Previous Post: