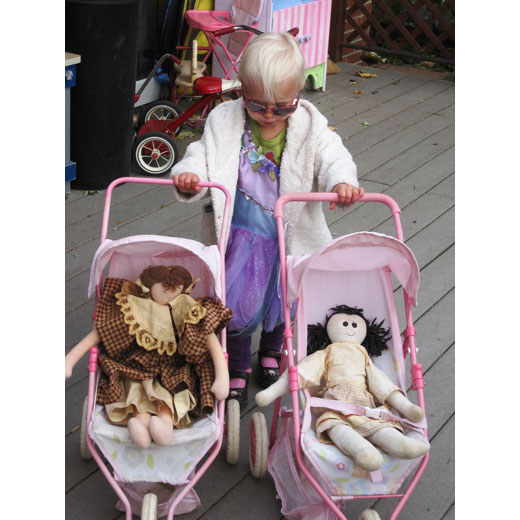 My son and I participate in a toddler play-group and some mothers are very insistent that their children practice sharing, while I tend to think that sharing will come with time. What are your thoughts?

However, while the idea of sharing is difficult, the idea of waiting and taking turns is very approachable, even from the age of 17 months or so. Sharing and taking turns are cousins, and to adults they may seem to be almost the same. But they are not. With sharing, you have to give up an object when you notice that another person wants it, and trust their generosity of spirit that they’ll notice that you still want it too. With taking turns, there is some pre-determined way of knowing when a person’s turn will be done, and the length of turns is usually enforced by an adult (when children are little), by other children (as they get older), or by nature (you get to the bottom of the slide, your food is gone, the music stops, etc.). If a child is waiting for a turn, he can know that if he is patient, it will come. If a child is waiting for another child to share, he may feel anxious that the other child won’t notice or care. I’ve seen this anxiety come out as whining (to make sure that the other child knows that he wants it) or grabbing (to make sure that he gets a chance to play with it). Likewise, if a child feels confident that he has the use of a toy until his turn is done -however that’s determined- then he can usually play happily. But children who think their toy might be taken away tend to guard/protect their toys very closely, not wanting to let them go even when their interest in it has waned. Children can feel like a toy might get taken away by another child grabbing it, or from an adult declaring that they have to share when they notice another child displaying interest in it.

How long should turns last?

The answer is, of course, ‘it depends.’ One tool I like to use for kids is to use a song to let them know when their turn will end. If we’re baking cookies and every child wants a turn stirring the bowl, I’ll sing “All Around the Mulberry Bush” and when the verse ends it’s time to pass it on. For longer turns, I’ll sing a longer song or I’ll start singing a song as the end of the turn approaches: “One-two, buckle my shoe” is a nice long one that feels like the turn is getting drawn out, even as it comes to a close. If many children are waiting for a turn for something, I’ll establish an order so that children can know that they won’t be forgotten. I’ll go around the table from left to right, if we’re serving food, for example. If children are at play and everyone wants a horsey-ride on my lap, I’ll announce the children in order, then help them remember who they’re coming after, if they ask.

How do you determine how long a child’s turn with a toy might be? This feels trickier than a horsey-ride, because ideally children should be able to go deeply into their play with a toy. At the same time, it’s good to see a toy be used by all who want it. How can you balance those? At Rainbow Bridge, I ended up with two rules around toys: 1) You can play with a toy for as long as you like, and 2) once you put it down on the ground or the shelf, then it’s for anyone to play with. At first, this rule feels unfair to many adults. What if one child wants to play with the same toy all day? Won’t this lead to hoarding? In fact, I found the opposite to be true. Hoarding and ‘guarding’ of toys tends to take place when a child is aware that another child wants they toy and might take it. When children know that they can have it until they are all done, they can relax. On the other side of the interaction, children stopped hovering near the children with desirable toys, because there wasn’t the hope that a) they could grab the toy, or b) an adult would step in and force the child to hand it over. Instead, if Suzy wanted the doll that Jane was playing with, I would help her ask Jane, “Can I play with that when you’re done?” and I’d help Jane say, “Yes, when I’m all done.” Then I’d ask Suzy, “What will you play with while you wait?” and I’d help her find something else to interest her. She didn’t have to hover and ask, “Are you done yet? Are you done?” She would know that that Jane was done when she saw the doll on the floor or on the shelf. At first it was hard for the children to wait, but I would always jump in if they needed help, and soon it was just how things were done.

Once these rules became established with the children, I noticed an unintended benefit: not only was there much less whining and fighting over toys, but the children had learned a really useful skill. Finding something else to do while they waited made waiting easier and more enjoyable, and this spilled over into other areas: when I couldn’t get a toy down from a high shelf because I was washing dishes, or I couldn’t tie a cape when I was changing a diaper, Johnny would find something else to do until I was free. When the sandbox was too full of children to drive the dump-truck around in it, Sam was able to find something else to do instead. The children were learning to defer gratification, a skill which, if displayed at age four has shown long-term effects on later success in life (read about Mischel’s marshmallow study here). The children were able to enjoy their days more, and I was able to enjoy the children more, as well.

Newborns and Toddlers
Next Post:Engaging Cooperation