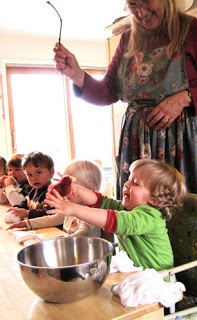 I’ve never before had children that regularly made a fuss but at the moment I look after two brothers (just turned 3 and 4) that get upset about washing hands, having nappies (diapers) changed and having shoes put on. I always give them warning (ie. in a few minutes we can wash our hands so that we will be ready to prepare our snack) give them a choice of helping to do it themselves or I can do it and try to keep things positive and fun but quite often none of it works. I hate having to force them to do things when they get upset but these are things that really need to be done so im not sure what else to do. If you can think of any ideas that might help us I would be grateful!
Thank you, Karen