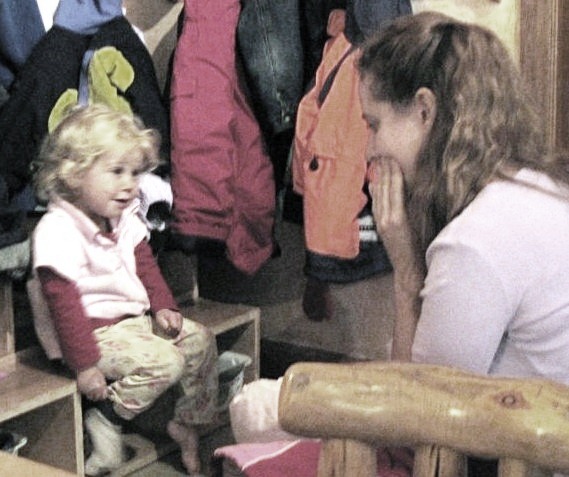 Being Firm without Being Mean

I’ve talked before about how it benefits children when we have clear expectations and firm boundaries, and how it is reassuring to children to know that we are in charge. I’ve talked about how having regular schedules and doing things the same way each time can help cut down on discipline issues and allow children to develop expertise. But even when we do all of these things, issues are bound to arise. One of the main tasks of the toddler is to establish their own opinions.

A mother came to me last spring to ask advice. Lately, when they had been getting dressed in the morning, her 2 ½ year old daughter wouldn’t allow them to put socks on her. Mom, who was home with her all day, thought they should pick their battles and wanted to let her go barefoot in her shoes. Dad said that it was important for her to know they were in charge, and once he’d said she had to wear socks, he couldn’t back down. He had tried reasoning, bribing, and finally resorted to manhandling her to put her socks and shoes on. The whole thing had taken twenty minutes and involved lots of tears. What was my opinion?

The first piece of my response is that while yes, it is important for everybody to feel like you are the one in charge, that doesn’t mean that you can’t take her opinion into account. So if you tell her she has to put socks on and she puts up a fight, you might say, “Oh! I can see you don’t want to put your socks on. Why don’t you try asking me politely: ‘Dad, please no socks!’” When she manages to ask politely, you can consider her request. “That was nice asking. I think it would be OK for you to have bare feet today.” On the other hand, if it’s snowy and cold, you might respond, “That was nice asking, but it’s a snowy day. We will all wear socks today.” Sometimes, just feeling like their opinion has really been heard will be enough to diffuse the situation. More likely, however, tears will ensue. At this point, many adults make the mistake of trying to reason with their child, pointing out the temperature, talking about the importance of warmth, etc. But reasoning almost never works at this point; it can even have the opposite effect and send tears into a tantrum. When you’ve said no to something, just be compassionate for a moment. “That’s a disappointment, isn’t it.” Give her a hug. Really acknowledge her feelings, and then move on, using humor and a little imagination.

You might try something like this: “This ssssock iss a sssslithery ssssnake! He’ssss ssseeking ssssomething to eat! Sssssssssss! The sock-snake probably won’t go straight for the foot. He might try to eat a book, then the bed-post, then it finds the foot. “Sssay, sssausssage! Delicioussss!” And the snake may be able to eat up that fat sausage, and the day can go on. But maybe he comes up to the foot, and she remembers and pulls her foot back. The snake’s ‘head’ bows down. “Ohh, the ssssnake is ssssooo ssssad!” The snake shakes his head sadly, and peeks up at her. She’s smiling a little smile. “Pleassssse, says the sssnake! PLEASSSSE sssend me the sssausssage!” Maybe she sends her foot his way. If she doesn’t, it’s time to take more drastic action. Put the sock on over your hand and swoop down and swing her up. “This snake is starving! He’s gobbling you all up!!!!” Fall onto the bed with her, kissing her and nuzzling her into helpless laughter. While she’s laughing, slip that sock on. Then immediately pick her up and move on into a different room. As you’re leaving the bedroom, you might say, “Wow, that was sure a hungry snake! I’m hungry too! Let’s see what’s for breakfast.”

The most important lesson in all of this is that when children don’t want to do something, don’t try to ‘change their minds’ through reason. You can’t use reason to change an emotion, and they don’t WANT to. Wanting is definitely an emotion. Instead, meet the emotion with respect and understanding, then work to bring up a different emotion using imagination and wit. When this other emotion is going you can usually do the action that they were protesting, without talking about it. If you’re tired and hungry yourself, and you can’t come up with the imaginative forces to turn that sock into a snake, there is the simpler (although less effective and less joyful) method of saying, “I see that you’re not ready to put your socks on yet. We can put them on in a minute or two.” Then after a couple of minutes, don’t discuss anything, just matter-of-factly put them on your lap and start pulling the socks on, while talking about something else altogether. Children who are loving the word “No!” will often let you do things without words that they will vehemently disagree with if you ask them verbally.

These are techniques that I use all the time with the toddlers in my care. By keeping my compassion intact and my imaginative forces strong, I am able to move through the day with relatively few battles of will. And sometimes I see how strongly a child feels about something, and I change my mind. But even then, children can rest in the assurance that I’m the one who is making the decision.

This is a blog post I wrote in 2010 but it didn’t make it over to my new website, so here it is now!